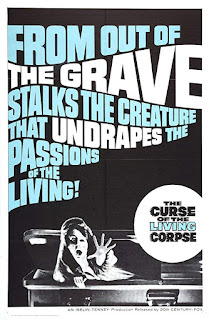 In 1892 New England, Rufus Sinclair, a tyrannical family man prone to cataleptic fits, passes away. His lawyer, James Benson (All My Children's Hugh Franklin), reads his will, which states that if his provisions are not fulfilled, his heirs will not only receive nothing, but die in the way they most fear. His wife Abigail (Helen Warren) will die by fire. Eldest son Bruce (Guiding Light's Robert Milli), an arrogant failed doctor with gambling debts, will be disfigured before he meets his end. Younger son Philip (Roy Scheider in his first film role), an alcoholic, will choke to death. Philip's conniving wife Vivian (Voyage to the Planet of Prehistoric Women's Margot Hartman) will drown. Good-natured nephew Robert Harrington (The Doctors' Dino Narizzano...as you may have noticed, there are a lot of soap actors in this movie) will lose that which is dearest to him, presumably his beloved Deborah (Carnival of Souls' Candace Hilligoss), Benson's daughter. Family servant Seth (J. Frank Lucas) will be buried with his master. All the heirs have broken the provisions, and soon they begin being picked off one by one, and the conclusion seems inescapable Rufus Sinclair may not be dead...

Fifteen months later, I am back and hopefully better than ever. The Curse of the Living Corpse is the third film I've seen by Del Tenney, and without a doubt the best. The Horror of Party Beach was marred by lame comedy and a goofy-looking monster, although some great songs by the Del-Aires did help redeem it a smidgen, and I Eat Your Skin was a pre-Romero zombie story released six years after it was made on a double bill with the more entertaining I Drink Your Blood. Eventually, I'm gonna try to see Tenney's fourth and final film, Descendant, starring Jeremy London (T.S. Quint in Mallrats), Katherine Heigl, and William Katt. This film is a murder mystery that, while not innovative, is well-acted and enjoyable. Roy Scheider in particular turns in a great performance as the dry-witted drunk Philip, showing all the signs of future stardom. Candace Hilligoss isn't given as juicy a role as Mary Henry in her most famous film, but she acquits herself well nonetheless. With the exception of Abigail and Robert, none of the members of Rufus Sinclair's family (especially Clark Gable lookalike Bruce) are very sympathetic, and their deaths are no great losses, although it's worth wondering how much Rufus' undesirable traits, often referenced by the characters, rubbed off on them. Tenney himself plays the titular Living Corpse, clad in a hat, cloak, and scarf a la the Shadow. The Cross and the Switchblade's Paul Haney and Captain Video and His Video Rangers' George Cotton play passable comic relief Constables. The music by George Burt and Wilford L. Holcombe is nicely atmospheric, and Richard Hilliard's cinematography is another strong point of the film. Fans of mysteries may or may not get a kick out of some of the classic tropes used, including the killer peeking through the eyeholes of Rufus Sinclair's portrait at his widow. If you want to see Del Tenney at his best, head over to Amazon Prime and check it out!
Posted by Sean Levin at 8:41 PM