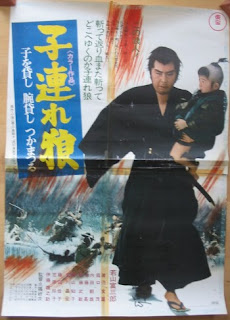 Today, we have the original Japanese poster for Kozure Ôkami: Ko Wo Kashi Ude Kashi Tsukamatsuru, better known in the West as Lone Wolf and Cub: Sword of Vengeance, the first in a series of six films based on the groundbreaking manga by writer Kazuo Koike and artist Goseki Kojima. Directed by Kenji Misumi, starring Tomisaburo Wakayama as kaishakunin turned ronin Ogami Ittō and Akihiro Tomikawa as his infant son Daigoro, produced by Wakayama's brother Shintaro Katsu (of Zatoichi fame), and written by Koike and Kojima based on stories from the original manga, this film served as the genesis for one of the greatest Japanese film series of all time.
Posted by Sean Levin at 12:19 PM No comments:

Inspired by my good friend Win Scott Eckert, I shall be posting on a quasi-regular basis cool images that have a special significance to me. This time it's a Turkish poster for Enzo G. Castellari's (Inglorious Bastards, The Big Racket) brilliant 1976 Spaghetti Western Keoma, one of the genre's last great films. Featuring Franco Nero (Django, Hitch-Hike) in the title role of the half-Indian gunslinger, this film also features such luminaries as Olga Karlatos (Zombi 2), Woody Strode (Once Upon a Time in the West), William Berger (Sabata), and Donald O'Brien (Run, Man, Run). Featuring a very unusual score that improves with repeated viewings and Peckinpah-style slow-motion carnage, this film is a must-see for genre fans. Quoth our hero: "He can't die! And you know why? Because he's free, and a man who is free never dies!" 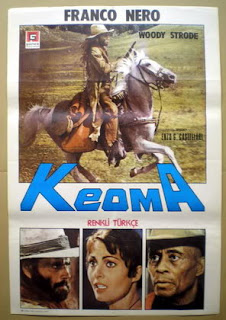