Today we have a gorgeous illustration by the great Joe Kubert featuring one of the heroes most associated with him, Hawkman. Kubert not only drew the Golden Age incarnation of the hero in Flash Comics from #62 (Feb. 1945) to the final issue, #104 (Feb. 1949), he was also the initial artist on the Silver Age re-imagining of the Winged Wonder, illustrating this version's initial appearances in The Brave and the Bold #34 (February-March 1961)-36 (June-July 1961) and 42 (June-July 1962)-44 (October-November 1962), as well as some of his appearances in the later The Atom & Hawkman.
Posted by Sean Levin at 12:10 PM No comments: 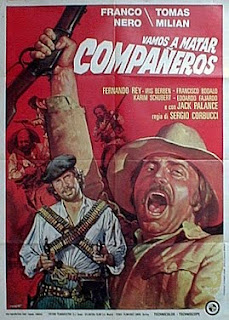 Today's image is an Italian poster from the criminally underrated Sergio Corbucci's classic 1970 Spaghetti Western Vamos a matar, compañeros, or simply Compañeros as it's known here in the U.S. Set during a Mexican revolution, this film stars Franco Nero (Django, Keoma), Tomas Milian (The Big Gundown, Don't Torture a Duckling), Fernando Rey (star of many of Luis Buñuel's films, including the same year's Tristana alongside Nero), and Jack Palance (Contempt, Shane) in perhaps his most memorable role, this film features many brilliant performances and one of Ennio Morricone's best scores. An absolute must-see for genre fans and film buffs.
Posted by Sean Levin at 8:39 AM No comments: