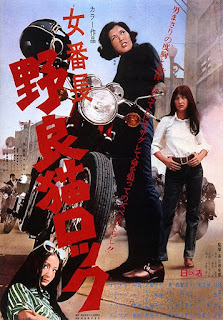 Biker chick Ako (Japanese-Korean pop star Akiko Wada) gets involved in a fight between a teenage girl gang led by Mei (Lady Snowblood's Meiko Kaji) and the debs of the male Seiyu Gang. Ako is welcomed by Mei's gang as one of their own. Mei's boyfriend, Michio Yagami (The Streetfighter's Last Revenge's Kôji Wada, no relation to Akiko) seeks to join the Seiyus, to Mei's chagrin. To earn membership, the Seiyus order Michio to persuade his friend Kelly Fujiyama (Ken Sanders), a half-Japanese, half-black boxer, to take a dive. Kelly also has feelings for Mei. Kelly reluctantly agrees to throwing the fight, but after taking a beating from his opponent, he marshals his abilities and wins. The infuriated Seiyus, led by Hanada (Godzilla vs. Mechagodzilla's Gorô Mutsumi) and his shades-sporting lieutenant Katsuya (In the Realm of the Senses' Tatsuya Fuji) try to kill Michio for not making good on his promise, but Ako convinces her new friends to come to his rescue. Mei's gang and Michio find themselves fugitives from the Seiyu Gang.

I love Japanese cinema of the '60s and '70s. From Yakuza to samurai to martial arts to kaiju to pinku-eiga, I love pretty much every genre they delved into in that era. I've wanted to see the Stray Cat Rock series for years, and luckily for me, Amazon Prime has all five films. I really dug the first one (aka Alleycat Rock: Female Boss, Female Juvenile Delinquent Leader: Stray Cat Rock, and Stray Cat Rock: Woman Boss), and am very much looking forward to watching the others. The series ran from 1970-1971. Yasuharu Hasebe directed the first, third, and fourth films. The second and fifth were directed by Toshiya Fujita, who directed star Meiko Kaji's most famous film, Lady Snowblood, based on Kazuo Koike and Kazuo Kamimura's manga.

Interestingly, Kaji stars in all five Stray Cat Rock films, but plays a different character in each one. There's no overt shared continuity between any of the films, as far as I know. Meiko is one of the most divine goddesses of my Japanese cinema pantheon, but the film's sole flaw is that she takes a backseat to Akiko Wada. To be fair, Wada is a talented actress, and a talented singer judging by her musical numbers in the film, and Ako is a memorable character. It's just a little disappointing that Kaji isn't more take charge as Mei, given her portrayal of such powerful and deadly women as Lady Snowblood and Sasori from the Female Convict Scorpion series. Wada also appeared in the next film, Stray Cat Rock: Wild Jumbo, but only had one song. According to Hasebe in an interview in Chris D.'s absolutely awesome book Outlaw Masters of Japanese Film, the series was originally supposed to be a vehicle for Akiko, but the studio, Nikkatsu, became more concerned with grooming the next generation of star, Kaji took over as the series' headliner, and Wadi didn't return for the last three films. The underutilization of Kaji is the one imperfection in this otherwise impeccable film.

Unsurprisingly, Hasebe doesn't shy from depicting brutality, such as when Katsuya's girlfriend uses a blowtorch on a captive member of Mei's gang. The presence of the obviously biracial Ken Sanders adds an interesting touch to the film, though his heritage is never brought up. The third film, Stray Cat Rock: Sex Hunter, which as I said before was also directed by Hasebe, apparently does explicitly touch on the subject of mixed-race Japanese, so I'm curious to see that one. There are some groovy scenes in a nightclub featuring bands performing in both English and Japanese. I hope the rest of the series lives up to the high bar this one sets!
Posted by Sean Levin at 2:17 PM No comments: 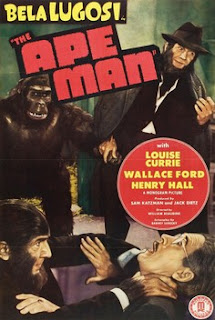 Agatha Brewster (Minerva Urecal) comes to America to find her brother James (Bela Lugosi), a scientist who has disappeared. James' colleague Dr. George Randall (Henry Hall) takes her to his mansion, where she learns that his experiments have transformed him into a half-man, half-ape. Investigating Dr. Brewster's disappearance are reporters Jeff Carter (Freaks' Wallace Ford) and Billie Mason (Adventures of Captain Marvel's Louise Currie). James' condition can be staved off with injections of spinal fluid, but this would require killing the donors, and Randall is understandably reluctant to do so. Therefore, James and his savage lab gorilla take matters into their own appendages...

The Ape Man is the third film I've seen directed by William Beaudine and starring Bela Lugosi, the other two being the fairly decent Voodoo Man and the execrable Bela Lugosi Meets a Brooklyn Gorilla, which I covered here a while back. Thankfully, our current subject is more akin to the former than the latter in terms of watchability. The absence of Sammy Petrillo helps considerably in that regard. Besides Bela, Louise Currie and Henry Hall were also in Voodoo Man. Both films also have surprisingly meta endings, in The Ape Man's case involving a oddball character who turns up at the most opportune times throughout the film, and whose identity is only revealed in the last scene. Bela as usual puts 110% into his performance. His ape makeup is cool, and way more convincing than the gorilla suit Emil Van Horn has to wear. Dr. Brewster's sister Agatha is supposedly a ghost-hunter, a la William Hope Hodgson's Carnacki, but other than a scene where Agatha attempts to convince Jeff and Billie the ooking they've heard coming from the mansion came from a spirit called "the Galloping Ghost," this never becomes relevant to the plot. Too bad, because an ape man and ghosts in the same movie would've been awesome, in my movie. Jeff is pretty much a sexist ass to Billie throughout, even though they're on friendly terms, stating in the aforementioned last scene he should take her over his knee for going off on her own to find Brewster. Then again, his character of Phroso in Freaks was kind of a jerk with a heart of gold, so there's precedent for such a character in his resume. Henry Hall is better here than he was in Voodoo Man, where he was saddled with lines like "Gosh all fish hooks!" and "What I'm really interested in is young girls," which taken out of context sounds really troublesome. Bela fans should definitely give this one a look-see.
Posted by Sean Levin at 11:51 AM No comments: 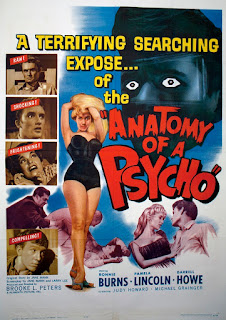 Chet Marko (Darrell Howe) visits his brother Duke on Death Row. On his way home, Chet is accosted by three hooligans, who slash his face with a broken beer bottle, leaving a scar. Returning home, Chet gets into an argument with his sister Pat (The Tingler's Pamela Lincoln), insisting Duke is innocent of murder. Meanwhile, we learn that the father of Chet's friend Mickey (Ronnie Burns, George Burns and Gracie Allen's adopted son) was the witness who identified Duke to the police. After Duke's execution, Chet and his friends don masks and give the D.A.'s son a beating as revenge. From there, Chet's violent behavior only escalates, while policeman Lt. Mac (Michael Granger) seeks to bring him to justice.

I've watched my share of "teenagers gone bad" films, and Anatomy of a Psycho is a contender for one of the best I've seen. It's a suspenseful, taut piece of cinema, and Darrell Howe turns in a performance that is frankly brilliant in in its intensity. Of Chet's buddies, General Hospital's Frank Killmond as the sycophantic Bobbie is a particular standout. Ronnie Burns is also quite good, flexing serious dramatic muscles to contrast with the comedic work his mom and dad were so famous for. Michael Granger makes a likable and dedicated cop. When he shows up at Chet's shack home without a warrant, he admits that he is breaking the law, and says that when a cop does that, people should worry. He's clearly saying that in a way that makes it clear he thinks cops should obey the laws they enforce. In the days when police brutality makes a movement like Black Lives Matter necessary, this made me warm to the character, although it is kind of goofy that when he first shows up at the shack he's jokingly wearing one of Chet and his pals' masks from when they roughed up the D.A.'s kid. Isn't that evidence?

Russian Boris Petroff's direction is able, and the solid script was written by Jane Mann of The Unearthly fame and Don Devlin, father of writer-producer Dean Devlin. Don also has a memorable role in the film as Chet's ex-Marine buddy Moe, who suffers a terrible betrayal at his friend's hand. Some of the music was recycled from Plan 9 from Outer Space, but while I deny to my dying breath that Ed Wood's most famous film is the worst ever made, Anatomy of a Psycho is a much stronger film overall. It deserves to be much better known than it currently is, but hopefully a recent showing on TCM will bring it a new following.
Posted by Sean Levin at 9:53 PM No comments: 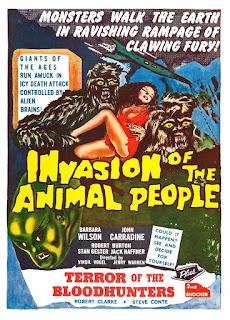 Diane Wilson (The Flesh Eaters' Barbara Wilson) is awoken by a piercing noise that causes her to run out into the street, where she is picked up by the police. Her doctor is unable to determine the cause of her seizure, but ultimately pronounces her in sound health. There is some speculation that Diane's attack is related to a UFO sighting that occurred at the same time. Later, Diane goes to Sweden for a skiing vacation. She receives a letter from her uncle Frederick (The Slime People's Robert Burton), an archaeologist, who she is planning to visit. Meanwhile, a spaceship crashes in Lappland, causing an avalanche. Believing the ship to be a giant meteor, Col. Robert Bottiger (Bengt Blomgren) asks Frederick and Dr. Erik Engström (Sten Gester) to investigate. Meeting Diane, Erik is immediately smitten, though Diane plays hard-to-get. Receiving a report of mutilated reindeer in Lappland, the scientists go to look into it, and find the footprints of a creature that they deduce must have been 20 feet tall.

Invasion of the Animal People has an interesting history. It was originally a Swedish film called Rymdinvasion i Lappland, directed by American filmmaker Virgil W. Vogel, best known for The Mole People. When it was released in the States in 1962, distributor Jerry Warren trimmed it to 55 minutes, also adding ponderous narration by John Carradine (who worked with Warren on his own films The Incredible Petrified World and Frankenstein Island) and a new opening scene with Diane's seizure. This wouldn't be the last time Vogel and Warren would be associated - footage of the Mole People was integrated into Warren's The Wild World of Batwoman, one of the contenders for the worst movie I have ever seen. Invasion of the Animal People isn't that bad, but it's not remarkably good either. Despite the title, there's only one animal person. The furry suit (not that kind of furry suit, ya pervs) does look reasonably cool, and the monster has tusks and padded feet. Diane Wilson isn't exactly a strong female character, spending a lot of her screen time after the monster shows up screaming and hobbled by a wrenched knee. At one point, she expresses a desire to go with Uncle Frederick and Erik to investigate the meteor, but Erik tells her, "You just stay here and look pretty!" How she resisted the urge to kick him in the balls, I'll never know. The aliens look kind of like the Coneheads cosplaying as Brain Guy from MST3K. Disappointingly, we never find out just why they came to Earth. A singer performs a song called "The Land of the Midnight Sun" in Swedish, with Erik translating for Diane. Invasion of the Animal People is better than 95% of the films Jerry Warren's name is attached to, but anyone expecting a classic of the genre will likely be disappointed.
Posted by Sean Levin at 8:10 AM No comments: