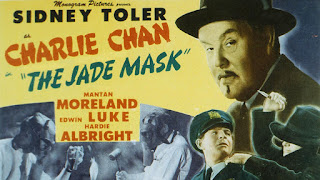 Charlie Chan (the mostly-Scottish Sidney Toler), working for the Secret Service in Washington, is staying at a hotel in another town with his bookworm Number Four Son Eddie (Edwin Luke, brother of Keye "Number One Son" Luke) and easily frightened chauffeur Birmingham Brown (Spider Baby's Mantan Moreland) when he's called to investigate the murder of Harper (Frank Reicher, Captain Englehorn in King Kong and Son of Kong), a scientist working on a gas that can make wood as hard and durable as metal, which the government feels will be very useful in the current war. Everyone in Harper's house hated him, from the butler to his assistant to his own sister and niece, so everyone is a suspect. It's up to Charlie to solve the case and find the formula, despite Eddie and Birmingham's bumbling and more bodies turning up.

Charlie Chan is often regarded as a racial stereotype, and considering that he's usually played by a white man speaking broken English, it's not hard to see why. However, in this film he's shown in a pretty respectful manner despite the verbal mannerisms and yellowface. I will say Toler is slightly more convincing as an Asian than Peter Lorre as Mr. Moto or Boris Karloff as Mr. Wong, but only slightly. Unfortunately, white actors being cast as Asians is a problem that has still yet to go away entirely, as shown by the recent Ghost in the Shell controversy. Eddie's a comic relief character, but there's no racial connotation to his buffoonery. The same, unfortunately, cannot be said of Mantan Moreland as Birmingham, who is a one-note character, and that note is "scared." His performance is a lot more wince-inducing than either Toler's or Luke's. The ending in particular is pretty undignified where he's concerned. Other than that, the film is a decent enough mystery, with Charlie working for the U.S. government during World War II, taking time away from his usual police work. There are some interesting elements to the plot, such as the life masks Harper has hung about his mansion of the people living in it in case he ever needs to identify them to the police. Also, a female helper of Harper's is a former strongwoman who helps him in experiments involving ventriloquist dummies that somehow will lead to the creation of a new kind of toy robot for children! These bits add a nice touch of oddity to what's otherwise a fairly standard whodunnit.
Posted by Sean Levin at 10:03 PM

While I fully understand and sympathize with the complaints about the racial stereotype and the yellowface I have to say that compared to Mantan Moreland's character, Charlie Chan is portrayed in a far better light. He's regarded with respect and admiration by the U.S. government and in most of his movies he's depicted as being an internationally known detective who is frequently called in to solve mysteries that have white detectives stumped.