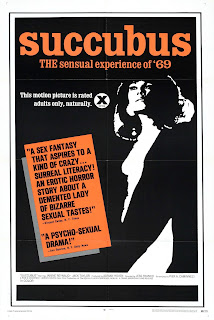 Lorna Green (Janine Reynaud, costar of Franco's Two Undercover Angels) is the star of  an S&M-themed nightclub act. Her boss Bill (Dr. Jekyll and the Wolfman’s Jack Taylor) is also her lover. Through the machinations of a mystery man (Michel Lemoine, Reynaud's husband at the time), Lorna, who has amnesia, begins experiencing dreams involving her killing people that come true. The first of her victims is Admiral Kapp (Franco regular Howard Vernon, or "Varnon" as the credits spell his name), who she stabs through the eye with a knitting needle.

I'm back! After three months of inactivity, something finally spurred me to revive this blog. I was doing a Google search for Andy Milligan's film Blood, and I was delighted to discover my review of same was the seventh result on the first page. Reasoning that would cause people looking for info about the film to check my review out, and from there perhaps my other critiques, I decided it was high time to get back to work.

This is the second Jess Franco movie I've reviewed here, the first being The Blood of Fu Manchu, but overall it's the seventeenth I've seen. Jess' work is a very mixed bag, but when he's good, he's really good. This film is really good Jess Franco. All his trademarks are here: nightclub scenes, zoom lens, and the awful Dr. Orloff himself, Howard Vernon. Of course, there's also some bare flesh on display, particularly from Reynaud, although Roger Ebert inexplicably called ugly in his review of Umberto Lenzi's Orgasmo according to Wikipedia. The film has a strong supernatural flavor, with Lemoine's character strongly implied to be the Devil himself.

The provenance of the film's original German title is somewhat curious. Franco claimed he came up with it when he saw a book entitled Necronomicon in writer Pier A. Caminnecci's home. Since the Necronomicon was originally the name of a cursed tome in H. P. Lovecraft's Cthulhu Mythos, one wonders what Necronomicon this could be. The forgery by "Simon" would not be released until 1977, with George Hay's version following a year later. Methinks Jess might've been pulling our leg.

This has to be one of Franco's more surreal films. Among other weirdness, we see an LSD party held by a psychiatrist, played by Cave of the Living Dead's Adrian Hoven which boasts a little person butler who, along with the other guests, imitates a dog and then tries to gang-bang Lorna as Hoven (who was also a producer) reads from a book. Admiral Kapp, who is served by two men clad in bow ties, collars, and nothing else, plays a meandering game of word association ("Candy?" "Sperms.") with Lorna before she stabs him in the eye. Lorna has a collection of mannequins in historical gowns who seem to come to life when she kills a blonde post-coitus. It's appropriate that both Godard and Buñuel are name-dropped, two filmmakers who were no stranger to putting the bizarre on film.

Those two worthies are not the only pop culture references in the film. Camus' The Plague, Kafka's The Castle, Madame Butterfly, Doctor Zhivago, the Rolling Stones, Fritz Lang, Alfred Hitchcock, and others are mentioned. Such nods can be insufferable under the wrong hands, but they fit the tone of Franco's film rather well.

Succubus is without a doubt one of Franco's most unique films, and has already become one of my favorites of the many I've seen, which are nonetheless not even a tenth of his massive output. This is more The Awful Dr. Orloff than Female Vampire, a director who was capable of great highs and great lows showing what he could accomplish when he tried hard enough. Shudder subscribers can check it out there. Essential viewing for Francophiles!
Posted by Sean Levin at 9:31 PM